Seeing the World Through New Goggles

I am trying to give myself a little break from interviewing one person a day, but Sunday proved to have some kick to it.

My purpose for the day was to buy new swimming goggles; I needed a new pair. So I made a day trip to Paragon in Union Square. Paragon has a testing area just for swimming goggles; I’ve never seen such a sight.  I decided to buy one rather fancy pair, and one cheap pair “just in case.”  So I will have a back up. This should last me for 10 years! I’m so excited for my next swim.  I also recently bought a new suit, the first one in five years!

I walked out of Paragon with my new goggles in my purse and I decided to stop in Barnes and Noble.  Another big errand– I am doing research for a new play.  The play is a taboo subject, so I thought I’d see what Barnes and Noble might have in stock on the subject.  Turns out, not much.  I can’t say what the subject is, but, it’s bad.

Really I need to go to the uptown library for this kind of research, not Barnes and Noble, but ah well.
Hanging out in big bookstores is one of my secret pleasures. I love to just look at books and read about new things; I could do it for hours.  I hang in the psychology section a lot; and “writers” section – but since I was a literary agent for three years, just about everything interests me. I end up buying a couple of books – damn, couldn’t escape without making a purchase. I bought Ayn Rand’s “The Fountainhead.” I’ve never read it – can’t wait.  The second purchase was “Fire In The Blood,” which I’ve been waiting to buy in paperback by Iréne Némirovsky.   If you haven’t heard the story of Iréne Némirovsky, you should know about her – it’s very interesting, but anyway.

On the way into Barnes, I spy a lady who is standing in front of some cages of doggies.   I should mention that Barnes and Noble is right next to Petco. The dark haired lady wearing a cap looks very sweet. Right as I walk up, she’s actually telling her life story to some strangers.  She’s pulled out her wallet and is showing off some photos.

“I’m seventy years old,” she says.
“You don’t look seventy,” I say.
“I’ve got a son who is forty.”
Seriously she doesn’t look a day over fifty.  She shows me her album of photographs.
I look down and see a cute little Yorkie in one of the cages.
“This one looks cute,” I say.
My friend has a Yorkie that she adopted from a shelter; she named her “Dior” and she barks all the time.  I sigh. This little dog is actually quite docile and sweet-looking, but I can’t get “Dior” out of my head.
“Can you believe that someone dumped her off like she was trash?”
“Really?” I say, but I am thinking about Dior’s constant barking.
Emelinda Narvaez has been rescuing mistreated dogs for over 41 years.
This woman really is an angel.  If you want a dog, she’s got plenty of cute ones.
When I first moved to NYC, I used to volunteer on Saturdays with another rescue group called “The Mighty Mutts.”
“They still come out on Saturdays,” she says.
“So are you always out here?” I say.
“Most of the time, as much as I can.”
“How’s it going?”
“Wonderful, I’ve gotten 2000 dogs adopted.”
Wow, now that’s amazing.  If you want to check out Earth Angels Canine Rescue and get yourself a new doggie or just donate, here’s the website.
On Monday I had my first “planned” interview, but in retrospect, without knowing it, I think Emelinda set the tone, which seems to be one of reflecting on the life we’ve lived and what we are still doing.
Are you doing what you love?  If you died tomorrow would you die happy?

Dan and his wife Cindy and their grown daughter (she’s now 26) are my neighbors; we live in the same building on Waverly Place.  I noticed several years ago now that mail would come for something called Radio Theatre.  Huh, I thought.  So someone who owns a theater lives in my building?

Dan and Cindy have two dogs, so I often see them out walking.  One day, about two years ago, I was doing one of my annual stoop sales and they had come outside to check out my stuff.  We chit-chatted about  about all kinds of theater stuff and started to become friendly.  Dan and Cindy went to my play that year, and I sent them my stage manager who ended up acting in his play “The Island of Dr. Moreau.”  See, the NYC theater circle is small indeed.

So the other day, I was reading an email I got from the New York Innovative Theater Awards and there he was, my neighbor, Dan Biachi listed as one of the winners.  His theater company won two awards, one for best original score and the other for sound design.  So I decided I’d make a point of interviewing him for the pop cycle. Sure enough, I ran into him a day later and was able to set up some time at Joe’s.
Dan almost doesn’t need to tell me that he “hates restrictions.”  He only had to say “Paris” and “avant-garde” and I believed him.  He’s a do-it-my kind of way theater man.

“I’ve been doing this for years – my own kind of theater – and I’ll just keep going because I love it.”
He’s gotten some good reviews too. Dan explained to me that he has a background in film and graphic art and has been represented in exhibits as an artist. Five years ago he came back to theater and has been going with his passion, Radiotheatre ever since.

“For marketing you have to be different,” he says with a swagger.
“My theater isn’t a musical or straight theater – it’s like seeing a movie with a score, so it’s unlike anything you’ve ever seen.”

Dan is a very downtown do-it-yourself kind of guy.  For example, for his award-winning show “The Island of Doctor Moreau” he wrote, directed, created the sound and all the original music himself.
“So when I got sick, I realized – wow, I do everything except act.  I need actors for that.”
Dan struck me as someone who understands how lucky he is.  He’s been living in the West Village for at least 26 years and has been doing what he loved for most of the time.  Strike that.  He’s always been doing some form of art. He’s never been a sell out.

“In the old days – the eighties – actors would come to NYC and live on the floor of an apartment.  Eight people would share a one bedroom. They’d eat some noodles to get by. These days that just doesn’t happen.”
He continues, “maybe one of my actors lives in the city.  They commute in from all over.”
“You mean, they live in Brooklyn, right? “ I say
“Yes, but Brooklyn doesn’t count as the city,” he says.
I laugh.
“Once you live in the West Village, you may never want to leave,” I say.
Radiotheatre has a new show opening on November 11th —  Dracula.  I’m definitely going to check it out.
Later that day, I thought about how lucky I am that I get to live here in the West Village.
If I lived anywhere else in this city I think I might go nuts. I hear Brooklyn is great and the apartments there are way bigger (and cheaper) but unless you also work in Brooklyn, it’s a real pain to get into the city.  That’s been my experience anyway.
Later in the day I went to my Pilates lesson at Equinox and spoke to my instructor Monica.  She’s fun and is also a painter, so I asked her some quick questions. 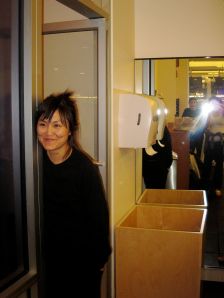 Who: Monica
Where: Equinox gym in the West Village
Occupation: Pilates Instructor
Monica has only lived in NYC for a year and half, and she’s also my neighbor, so I see her at Joe’s all the time.
“What’s been the craziest thing that’s ever happened to you in NYC?” I ask.
“Seeing my sister get in a car accident.  We got the call and when I showed up she was all bloody lying on the ground.”
“Wow, that would be scary,” I say as I am doing one of my Pilates moves.
“Somehow I knew she’d be okay,” she says.  “I just knew.”
After that we talked about this scary economy and I was wondering if people are not coming in for Pilates so much, but I decided not to ask.