The Week of the Playwright, starting with Sonya

It’s the funniest thing to sit next to a playwright as they watch their work being read out loud.  They smile, laugh and some playwrights actually say the words with the actors. Truth is, no matter how much we would love to hide our emotions, we are filled with a magical glee when we hear our words spoken out loud.
Eleven years ago was the first time it happened to me, it was a shock.  The actors started in, with scripts in hands moving about the stage (it was a staged reading of short play I’d written at A.C.T. as part of a class).  I worked in an ad agency around the corner, and was busy writing my first 10-minute play in between meetings.
As we were handing the scripts out to the “professional” actors who came in, the teacher informed me that we were out of guy actors.  So without thinking, my non-actor, new boyfriend stepped in to play the part of the husband.

I was so caught up with watching the action on stage, I forgot that my boyfriend was acting in the play. He seemed as good as anyone else.  I think he had fun, and since he’s scientist now, I bet he hasn’t done anything like that since.
“Did you hear them,” he said after the play ended. “They were laughing.”
He didn’t need to tell me.  I heard it.  I knew it.  I was filled with an overwhelming feeling of success and he was a part of it. Hearing my play out loud was better than sex, drugs and getting drunk.  The power of playwriting was addictive, and I wanted more, a lifetime.
I guess it’s not surprising to know that I stopped wanting to audition for acting parts after that.  I still like acting, and technically, I’ve made more money as an actor than as a playwright.  But I love playwriting.
This brings me to this week’s interviews – overwhelmingly they have to do with plays and playwrights.  Though, I certainly met some other interesting folks a long the way, this week is devoted to the theater, even if it’s the theater of life.  What’s been unfolding with the election and economy, well, it’s theater.
Here is a photo of me in my element.  I’m at EAT “Playwrights Circle” about to read a fellow playwright’s script. 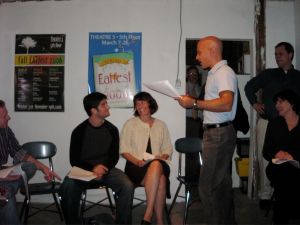 On Monday night I went to my friend Aurin Squire’s new play reading “Friendly Fire.”
Aurin is a very different kind of playwright.  He doesn’t seem overly excited when he sees his own work, but then again, he’s written like a million plays.  He doesn’t overly baby his plays and sometimes he should.  He can handle any genre; he’s a total professional.  I’ll stave off the temptation to write too much about Aurin because I think I might interview him at a later date.  I just heard via email that Aurin is off to Columbus, Ohio to help register voters to vote for Obama.  Go Aurin!
Tuesday, I went to the East Village to interview my friend and playwright Sonya.

Who: Sonya Sobieski
Where: 8th Street between 1st and Avenue A
Occupation: Playwright/Instructor/mom to a three-year-old Sklyer.
I knew about Sonya long before we became friends.  Sonya was a literary manager at Playwrights Horizons for nine years and I think I might have sent her some plays when I was a literary agent.  Some years later I went to see a friend in this very imaginative play called “Commedia dell Smartass,” which was written by Sonya. I loved the play, and thought I’d like to know the woman who wrote it.
Fast forward two years.   I see that the same Sonya is teaching a private playwriting class at NYU so I decide to take it.  It’s a great “class” and through a series of private one-on-one meetings, she really helps me understand and make my play better. Since then, I think it’s safe to say we’ve become buddies.
Today Sonya has graciously agreed to meet me for the interview on a day that is normally reserved for being a mommy.  We met a few moments before her daughter Skyler is finished for the day with preschool.  It was fun to see Sonya as a mom.  I’ve heard her talk about it, but I had yet to see her interact with her daughter.  It’s very sweet.
I hope it happens to me too (being a mommy that is) but it’s hard to imagine how a playwright deals with the new responsibility.  See, us playwrights — we already see our plays as our babies.
Sonya seems happy with motherhood, but it was a difficult transition.
“When I first had the baby I felt so out of it, like I would never get back to myself, and then three weeks after giving birth this miracle happened,” she says.

I ask what it was, thinking it would have something to do with her new baby, and it wasn’t about that at all.

“I was asked to fill in to teach a playwriting class that Christopher Shinn dropped out of at NYU.  It brought me back to life.”
“So having time to yourself is important?”
“Yes, but it’s so hard to see that when your in the thick of it,” she says.  “Being a mom can be very overwhelming.”
“Theater is what brought you back, but how long have you been writing plays?” I ask.
“Forever,” she says.
“You mean since high school.”
“No, since before that.  I think there is even something out there from when I was seven.  It was terrible.  No, actually it was pretty good,” she says smiling.

Sonya grew up in Cincinnati and got her undergraduate degree at Smith College in MA.  As soon as she graduated she came to NYC and interned and eventually became the literary manager of Playwrights Horizons, which is how she became such a staple of the NYC theater community.  Eventually, after getting an MFA in Playwriting at Brooklyn College, she quit her day job of reading and helping to chose scripts for one of the major Off-Broadway theater companies in New York City.  I think she needed to focus on her own playwriting for awhile.
“I should have left sooner,” she says with assurance.
“So would you go back?” I ask.
“Absolutely not,” she says without a moment’s hesitation.
“But don’t you miss having a regular job?” I say.
“Well that’s why I am trying to break into other forms of writing.”
Sonya just had an article published in The Villager and she has a reading coming up with her writer’s group The Sanctuary Playwrights on October 29th.
I hope to see more of Sonya’s plays soon.  She’s really a talent and a nice person. Sonya is a playwright who gave her time and talents to other playwrights, and still does through her teachings.   In this business, it may not benefit your career in the short run to help others, but in the long run, being nice is better than being good.  Sonya’s lucky, she’s both.
Skyler looks anxious to get home.
“We can only do one errand a day,” she says with her mommy smile.
To Skyler in a higher pitched voice: “Okay, we’re going to go to the store and I promise we will go right home after that.”
We say our goodbyes and I make my way by bus back to the West Village.
I used to live in the East Village, but one year was enough for me.  I had a lot of fun that year – not stop party time.  I was a East Village girl, but I’m a West Village woman.  Here’s some photos I took on my way as I traveled from East to West. 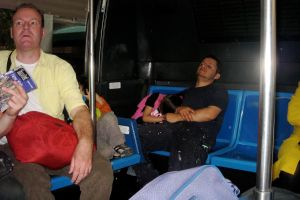 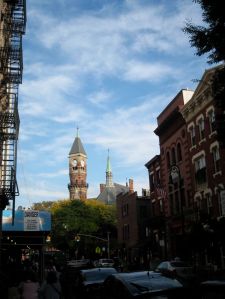