The Confidence Man on a Boat 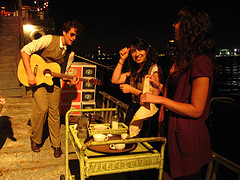 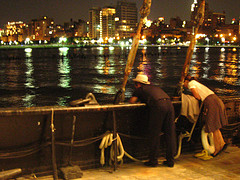 Actors from The Confidence Man

Actors from The Confidence Man

A couple of weeks ago, I set out for yet another New York City adventure – late in pregnancy too, which surprised everyone.  My friend Lara Gold was acting in a play on a boat, so without knowing too much about it, a friend and I booked tickets for the opening night of previews of The Confidence Man, which was a play being performed on the Lilac, a boat found on Pier 40 in NYC.  I was excited to go see a show on a boat – that’s a little different, but this experience was a complete surprise for me and my unborn baby.  The Woodshed Collective, a young group of producers who like to do interactive, large ensemble plays in odd places – like an office space, or on a boat for example, decided to tackle The Confidence Man by Herman Melville.  When we arrived at the pier of the Lilac on Pier 40, we were put in groups based on the number of our ticket and assigned to a docent, who would be our guide for the 2-hour boat play.  Turns out, this was not a normal play at all.  It was many interweaving stories out of the book put to dialogue – and depending on what number (or who your docent is) you will be seeing a different story.  Our docent was hilarious and a great improver, and the stories were fun too — though, none of it made much sense to be honest which is probably because they were out of context.  The experience, however, was still extremely unique and I did feel like I was in a different time altogether.  Even though the boat never left the dock, baby and me were in for the ride of our lives. The audience members had to run all over the boat, up and down and, well, for anyone of you who have a disability, have a hard time walking or standing – or happens to be 81/2 months pregnant, I wouldn’t suggest it.  I’m glad that no one mentioned the running around to me, or I probably wouldn’t have gone.  For now, I’ll chalk it up to one more wild adventure for a pregnant lady who loves drama.