History in the Making: Barack Obama is our Next President!

Everyone is screaming at my house. 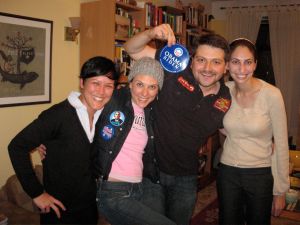 All of New York City is going nuts!  Obama just hit 270 electoral votes.
The latest political news from John McCain: They have turned off the news. It’s like the sinking of the Titanic; the Republican party has turned their focus to Hank Williams Jr.
So my house is hopping!  Fake Obama Girl showed up, champagne is flowing and I’m getting drunk.  The party just went outside and left me because “I’m being anti social with my blog.”
WILL.I.AM VIA HOLLOGRAM just appeared on CNN. I am not down with CNN’s hollogram technology.  It’s cheesy!
We just did a “cheers” to Barack; and then my husband Dmitry said a few poignant words about Obama’s grandma passing a day before this historic moment.
“Barack Obama’s grandma knew it wasn’t close race; she knew her grandson was the next President of the United States. Her work was done, she could go in peace.”