I miss my mentors. I miss my old friends. As we get older, we will start losing people. Two of my mentors passed away last year — Le Wilhelm, who I loved with all my heart. He was so supportive of my work, and he was just such a heartfelt, real person. He produced my first play in NYC. But even when we weren’t working together, I enjoyed his Face Book political rants. He was very opinionated and Southern to his core. He was gay, but very Right and in the theater in New York….so he was pretty funny. I miss seeing those hilarious comments pop up on my feed. They made me smile. Carolyn French, who was an agent at the Fifi Oscard Agency also past away last year. I sat next to Carolyn when I worked at the agency and we became great friends. She begrudgingly became a fan of my playwriting too, even though she really wanted to me to become an agent. In fact, Carolyn invited someone very important to one of my plays years ago, and this person loved my play and invited me to “submit more material.” This was a TV executive. This was a very big deal. I wasn’t ready for TV at the time, so of course nothing more happened (mostly because of me)– but all these years later, this TV executive is back in contact with me again. Carlolyn was not my agent — and as I said, really didn’t give a hoot about my plays. But she saw my play, liked it and made a call for me. Perhaps it was “the” call of my life. Anyway, she’s been gone now for eight months. I think of her often. I still think that we will go meet up in Bryant Park for lunch, and I just miss her. A compliment from Carolyn or Le meant the world to me for different reasons, but the same reasons. One of the last things Carolyn ever said to me was to tell me that she thought I was a wonderful mother. I brought baby Maya to see her one day, now four summers ago and she couldn’t get over the change in me: “Oh Laura, you’ve found yourself. Just look at you.” Of course, this was both pleasing and frustrating to me as you can imagine. “No, no, no…I’m more than a mom. Ugh. This mom-thing isn’t finding myself, ” I thought to myself. But maybe, what Carolyn and others were seeing in me was a Zen that rises up within us as mothers. We are bigger than anything else, even our own ambitions in that moment. We are mothers.

I went to the memorial of my mentor, Le Wilhelm last night. He died on September 25th, over a month ago. I just haven’t had time to stop and process all that’s happened these past six weeks. It’s been a whirlwind with my kids’ birthdays, school starting again and my own play reading.

I did make it to the hospital in time to sit by his side. I was surprised by how much love and emotion I had for Le, how hard it was to say goodbye, how much I wanted to curl up in his arms and get a hug. For much of my time in New York City, for the past 13 years, Le was my protector…he held me under his wing and gave me encouragement when I needed it the most.

He was an odd find for me in New York City, but again knowing me and the more I hear about Le, I’m not at all surprised. Le was a gift to this world, a gift to me. He was a large man in stature. Geez, how tall was Le? Maybe 6ft-5 and he was, for most of the time I knew him considered to be very large. He later grew thinner from illness, but that’s not how I remember him. He was this great presence, like a king, really. Whether standing on a street corner smoking or sitting in his special chair, drinking and holding court at Zuni’s, he was truly beloved and admired by those who mattered to him.

The summer of 2001 was such a strange time; it was like the pink before the red, before September 11th, before the dread, before things really changed. And for me, it was like the last summer of my youth. I played most of the spring and summer of 2001. I had gotten laid off from my job and had drifted into an uncharted, unknown state. I was definitely wandering; I was searching and finding my artistic self in the big Apple.

Le was from a different era all together. He was probably 54 when I met him, but looked older. He already had that seasoned feel. Somehow, maybe it was the left over food stuck in his beard, or the stains on his untidy shirt.  He lived in New York and had been running a theater for nearly 20 years. He was from Missouri, The Ozarks. He was a larger than life southern man who didn’t give a shit what you thought about him.  He just loved theater and loved to see “the magic” happen. He lived and breathed the stage as if it was his air. He was a prolific, talented writer who created characters who he loved, which of course actors reveled in.  As a director, he chose difficult, interesting plays and as a producer, he enjoyed helping new writers gain confidence (like me). He was an encourager, a friend. He openly hated the elitism that is so much a part of New York theater,  so he created an Off-Off Broadway theater company for the odd balls, like him, like me, I guess.  How one finds their way to Love Creek Productions — is, well, part of the fun — we are all odd balls, aren’t we?

I had been doing this and that all summer long in 2001. I lost my job and instead of getting another one, I spent the summer really fooling around, having no money. I was so so poor that summer. I had been an extra in a movie and on the set, I mentioned to one of the other extras that I wanted to be a playwright. She told me that she was part of a theater company that often produced members’ scripts. So sent an email to Le Wilhelm, the founder and the artistic director of Love Creek Productions. I auditioned for him a week later.

I’ll admit, the day of the audition, I thought the whole thing was strange. There was this old man watching me do my monologue — and then he just cast me in something — right then and there. It was so simple, except that I had to pay $100 to join the company. Uh, okay. I was lured in by getting to act on the stage in New York! Then he read my play and two days later, he told me that  he really liked it and “let’s produce it.” What???

From that day forward I was able to call myself a produced playwright. September 11th happened, I wanted to drop out of the play — two of my actors dropped out — it was a terrible, scary time. Nothing but tears and confusion. But Le pressed me to continue, and unlike some of the folks he worked with, I did it, I carried on. And through that “moment” of courage and perseverance or whatever it was, Le and I formed a very strong bond that would last us until his death just over a month ago.

Le was quite simply one-of-a-kind. He meant so much to so many of us. He was a mentor, a person who it would seem was here to bring people together. It’s like a piece of New York is gone without him here. I am grateful, so so grateful to have known him. 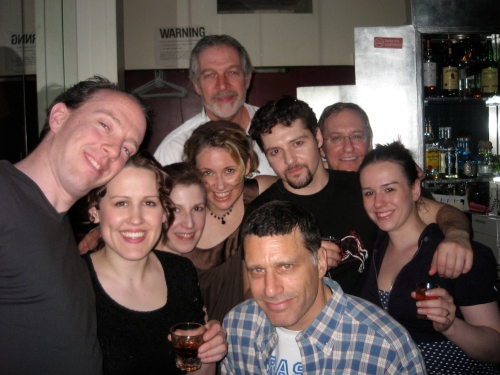 As my friend Jason Nunes said last at the memorial. “We miss you Le Wilhelm. Very much. “