A Story of Early Voting in LA

This is from an email that my father-in-law, Vladimir Paperny wrote about taking his elderly mother to the early voting center in L.A.

I took my mother, who is 90 and walks with a walker, to the only early voting place in LA county, Norwalk. I heard there were lines but did not expect the line to be about a mile long. To get to the tent, where you are assigned a number, you have to stand in a line that goes around a block. That takes about 2 hours. From the entrance to the tent to the voting booth it takes about 3 more hours (see photo). The crowd is about 60% black, 25% other minorities, 15% white. Because of my mother’s walker, they took us directly to the registration place, so the whole procedure took us less than an hour. Lera was very impressed a) with people’s willingness to spend 5 hours to cast their votes (it’s reasonable to assume that many voted for the first time); b) with the crowd’s relaxed and friendly behavior (no drunk fights she had expected); and c) with the efficiency of the registration process — the Registrar’s office workers (with about the same ethnic distribution as in the line), despite their slow and lazy movements, were, nevertheless, efficient and eager to help. The place was supposed to close at 4 but the only thing they did at 4 was to put security guards at the end of the line to stop latecomers. I don’t think they would go home any time before 9. 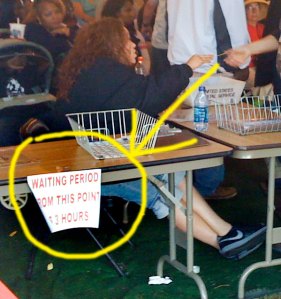 Two days earlier, my mother was involved in another political action. There was a discussion at her table at the Adult Health Center she goes to. Some of the people she used to be very friendly with started saying things like “he is an Arab”, “he is a Muslim”, “we don’t want an African president”, etc. At this point, my shy, quiet and mild-mannered mother (a straight A student at the Institute for History, Philosophy and Literature, class of 1941, former head of Literary Criticism department at Novyi Mir magazine) slammed her fist at the table a shouted: “I am ashamed of you! This is racism!” Everybody shut up, and the discussion ended. Viva Lera!