Why Seeing the play “Wood Bones” is Important

Wood Bones is an important play for New York Theater. It’s written by a Native American playwright and it’s in NYC. When was the last time you saw a play written by a Native American playwright? In NYC? I don’t know about you, but this will be the first time for me and I’ve been going to theater in NYC for over 10 years. The play is also seeped in ritual and written about and for Native peoples who are so marginalized that we don’t even talk about them or know how to talk about them.  Through a haunted house story, the play invites the audience into a world I have rarely seen, one of the modern Native American Indian — the men and women who live on reservation land — or not, and who have learned to hate and  honor their traditions.

One of the things that I love about theater are the worlds it allows you to visit. For 90 minutes or more, once the theater is dark, the playwright, director and the actors are holding you captive and show you a world with living and breathing characters. You leave the theater, at the very least, being inspired, one would hope.  Possibly you’ve learned something that makes you think about things just a little bit or a lot differently than you did going into the theater. This should happen even if the play is bad or doesn’t make sense.

I’m going to tell you something — even my stinky plays take the audience on a journey. My very worst play, a play that got me nearly got me kicked out of my MFA program was about a brother and sister when the brother was sent away to a mental institution. The other play that really got me trouble (not because it was bad, but because it was about a professor) was about a guy who masturbated too much who was about to die, but he could turn things around if he could be nicer to women.

Plays these days are BORING and the coverage in the media is male focused (white male focused) and also BORING.

I am tired of seeing ho-hum plays that are extremely cliched and only made new by a celebrity or a prop.  This unraveling of quality is happening all over Hollywood and for the past 5 years it’s practically ruined theater for me in New York City — especially Broadway. Did anyone see that play Grace? So Paul Rudd is supposed to make your play interesting? That’s a lot of work for Mr. Rudd!

I rarely go to theater anymore. I have 2 good excuses – their names are Maya, who is three and Lilly who is only one.  My first priority is my children. I just don’t have the time to go out to theater like I once did. But I am also left a tad cold by the theater when I do go.

I am a playwright with some credentials, enough to speak my mind at least. I feel that I have a style. My own work is quirky, usually dark and edgy and I’d very much like to see things that have the following criteria:

The play should be well written, well acted, have some humorous moments that show intelligence and wit. But the play should not only be witty and it should not be perfectly well-made.  Revivals are fine, and who doesn’t love some of the old great plays?  I have seen most of them at least once, and I don’t really need to see them with a celebrity in one of the roles. I just don’t. It doesn’t make them any better, if anything, like in the case of “Cat On A Hot Tin Roof,” I believe a celebrity actress made it worse. Another thing in this rant, why would I want to see a play where nothing happens?

Here’s what I want to tell producers:

I really don’t care about your set if your play is boring. That’s great that you can write beautiful prose, and say some interesting things and I love it that you are smart, but if your story is not new and exiting and by god original, then what is the point? Are you taking me on an exciting journey? Does your play make sense? Can I follow it? What do you want me to think and  feel when I leave? Have I learned something new, or have I merely been mildly entertained?

For me, the answer is always this: Your play should have taken me on a trip (I love “Trip To Bountiful”),  and would love to leave the theater having learned something new. I like bold subjects, and I don’t like prodding through topics that have been done again again.

Turns out, for me anyway, doing the PR for Wood Bones was an education, and a mind bending one at that. As soon as I took the job, I realized — oh wait, I’ve never done PR before, not officially. Also, I have no idea how to reach out to Native Americans in New York City. Is there a Native blog for New York? And I really don’t know very much about Native Americans or their community. American History was my favorite subject in college and Sacajawea my favorite book; and rafting down the Grand Canyon was one of my favorite trips of my life. And, by golly, my two-year-old nephew is part Navajo!  Guess what? Despite all that, I still don’t know shit.

I’ve been lucky in my career. I’ve worked in marketing since graduating college. Though I haven’t always loved that I do marketing, the fact that I am also a writer and playwright, and am a naturally curious person, my career path has led me to some interesting opportunities to say the least. The jobs I land are so very random, but usually in a good way. They are either good for perks (Starwood Hotels) or for something else — an entertaining story.

My very first marketing job was working for the French company, JC Decaux, an outdoor toilet company. Yes, that’s right. I helped open their flagship office in San Francisco. My focus was the display ads on the outside of the toilets, so I was making phone calls to Macy’s, Calvin Klein and Ralph Lauren,  but the office was small and I often took calls from druggies and people who just wanted to use “The John” in peace.

My next job was much more normal. I worked in a really fancy office on Maiden Lane in San Francisco. Obviously after my first toilet job, I couldn’t wait to have a respectable normal job. I worked for one of San Francisco’s chic advertising agencies as an assistant media planner and my client was Kia Motors, a Korean car company, I’m sure you’ve heard of it. I spent my days dressing cute and flirting with a co-worker. It’s a frilly time…before the Internet boom, just before….and I was lucky to jump that ship and land at my next job which was the very cool, hip Salon.com. I loved this job, one of my favorite jobs ever.  I went camping with Jake Tapper and a throng of other seasoned journalists who are now on CNN and really very famous. Later, when I moved to New York, highlights included doing the online marketing  for the W Hotels and for DIRECTV. I got to go to fashion shows and held court at big meetings, but that power and money didn’t make me happy. In fact, I cried after my first day at DIRECTV because I just didn’t want to work for a big company, it’s not my style.

When I was very young I spent 2 summers in France working in restaurants learning French. I also smoked way too many cigarettes and drank like a fish and sipped lattes with a ciggy in one hand with a cute hat on my head. I used to be able to stay up all night and dance on bars, get lost and come to work at 8AM, drink a huge glass of fresh squeezed OJ and everything would be okay. This French experience is why I got my first job for the French company and probably why and more importantly how I got into marketing. I landed that first job because I spoke French.

At some point, when I was in NYC, I decided I wanted to be a theater artist and I worked my butt off to make that happen. When you have a true passion for something it’s not really that hard. Even though I had a marketing background, I spent 90% of my energy working in the theater. I got my MFA from the New School for Drama, I acted in numerous plays and was even the star of a Russian mini series. I’ve written and had over 40 productions of my plays over the last 10 years.  I spent the 3 years that I was in grad school working part-time as a theatrical literary agent. I was also copywriter for a major theater, a dramaturg for a summer, an assistant on Broadway.  I’ve directed plays, staged managed and written reviews. This year I can add two new titles to my rap sheet:  play contest judge and press rep.

So what’s my point? I’m not sure. It’s 5:30 in the AM. Wood Bones is original, Wood Bones is exciting – it’s well acted and makes sense, and I think you should see it. And then, perhaps a day or two later, when you want to know more, take a trip to the Native American Museum and bring your Kleenex, because you might cry. 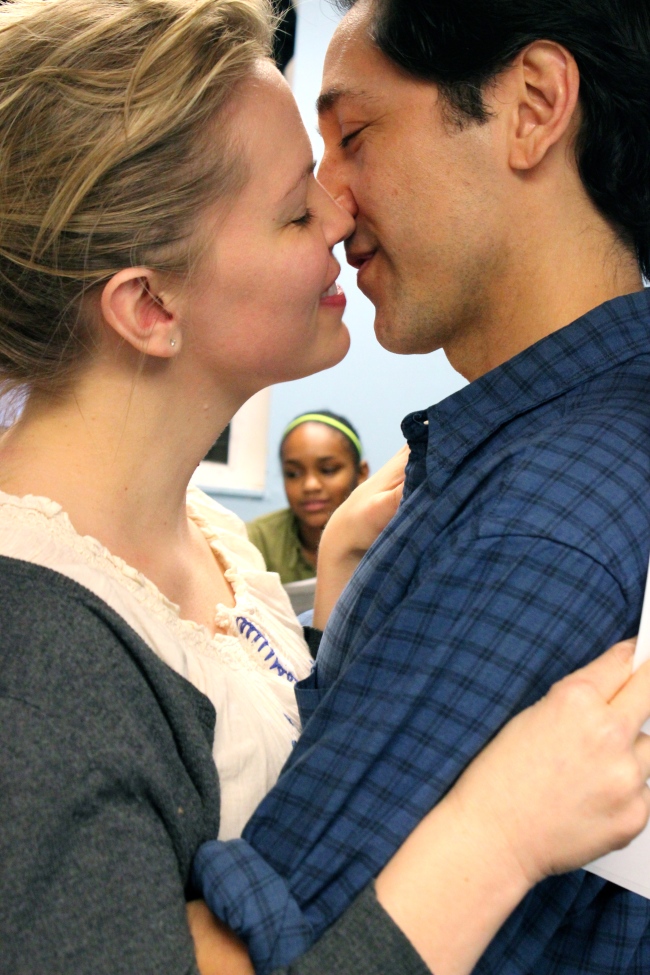